Political art. I sometimes think my work [paintings] should be more political. Political in a more overt way.

I started painting portraits (in my room) at the very loaded age of 13. I looked in the mirror and made translations that flew in the face of what models in magazines looked like. My dad, by this point, was no longer an ad agency art director. He was painting large abstracts and watercolor landscapes, and doing freelance commercial art jobs in his studio in the back yard. My mom (an art school graduate) was painting still life from nature in her studio. Neither of them painted portraits at that time.

Fast forward to a point in the early 00s when I took 11 x 17″ laser copies of those teenage self-portraits on tour and put them up at Mecca Normal shows. There was a night at the Smell in LA where I could see them, my teenage faces, from the stage while I was singing songs from The Family Swan album. Songs about my family in those years. I realized (while I was singing) that I had inadvertently found a way to talk to my teenage self, to offer an adult perspective (mine) to her.

In current times, between the deaths of my parents, (with my dad losing his marbles and the difficult nature of being around while this happens, trying to help him and protect my own marbles etc.) it seems like painting faces (and all the historic energy involved here) is prit near the best thing I can be doing. It’s political in the way that finding something that works, something that’s right, fairly early in life is political (self-expression) and then returning to it years later for some of the same reasons is political.

Comment on the post:
“I think of pretty much everything I’ve ever seen you do as being political. Maybe the portraits aren’t specifically “political” in content, but the motivation behind them – $100 paintings to avoid having a day job and to work towards a free artist residency program – sure is! The art and music and writing and living are all congruent expressions of your political integrity. Or to paraphrase Godard: …not to make “political” films, but to make films politically.” – Steve Peters, the Chapel Performance Space at the Good Shepherd Center, home to the Wayward Music Series, Seattle

Video: In the Highly Nuanced Life of the Conqueror

We’ve started working on new songs! This is one of my favourites so far! Words arrived spontaneously while Dave played the fourth or fifth piece of music he’s been working on.

In the Highly Nuanced Life of the Conqueror

In the highly nuanced life of the conqueror

Where we wield the sword, shoot a gun, hurt someone
now they’re dead
then you move on to the next one
Ya ya ya ya
you’re gonna move on to the next one
and the mayhem continues
and are you feeling better as you move across the landscape
killing, maiming whatever pixels get in your fucking way
or turn the page in the book where the damsel is in distress again
and some guy on a horse is gonna ride by and grab her
and swing her up onto the antiquated saddle thingy

And they ride off and I guess you’re one of them
you’re the guy , you’re the girl, you’re the rescuer, you’re the victim
or sometimes a little of both
a little bit of each
at the same time
Ya ya ya ya
Are you feeling any better?

When you’re living out this violence
that you’ve ingested
instead of
finding other ways and other things to do
Ya ya ya ya
Are you feeling any better
about yourself and any others in your life
that you just can’t seem to talk to?
Ya ya ya ya

In the nuanced life of a conqueror
on a white horse, a black horse, some kind of tank thing
with a gun that’s shooting people that aren’t really people or so you say
or so you say
Ya ya ya ya

“We Oughta Know” by Andrea Warner

An entry in an appendix of Canadian women in music, in the book “We Oughta Know: How Four Women Ruled the ’90s and Changed Canadian Music” by Andrea Warner (Eternal Cavalier Press, 2015)

“Underground art-punk rock duo Jean Smith (vocalist) and David Lester (guitarist) have been crafting weird, tightly coiled but loosely structured songs about gender, feminism, politics, and social justice isues since 1984. Anybody who knows Beat Happening, Bikini Kill, and Sleater-Kinney should know Mecca Normal, almost nobody does. I’m ashamed to admit that up until last year, I barely knew them either. They’re a hometown band and I’m a feminist who writes about music and still I never came across Mecca Normal until someone alerted me to their existence after I wrote an essay about how much I missed the political fire of music from the ’90s. Mecca Normal were riot grrrl and DIY before those movements existed, and they were tireless in their commitment to their art, releasing seven records in the ’90s alone. In fact, Mecca Normal were basically doing the 90s in the 80s. Consider the still-relevant subject matter of their mid-’80s tunes like “Smile Baby,” which calls out street harassment (yes, three decades ago), “More, More, More” which addresses the privilege of white men and the American Dream, and the simple, chilling, and inspiring “I Walk Alone” which affirms a woman’s right to safety in a public space. It’s important music that still matters today.” – Andrea Warner

Opening for The Julie Ruin

Just as we were about to start the show in Portland, David said he didn’t see Pat Maley in the audience. I spotted him front and center and handed him Dave’s Sony (consumer) video camera as one does when in such situations. No advance warning or anything civilized like asking with a “please” attached to it. Doh. I haven’t seen Pat for a couple of years. He smiled and took the camera. What a guy! Next time I looked at him he was shooting with the Sony on one eye and an iPhone on the other, like some kind of weird binoculars. I had to look away. It was kind of comical, but mostly just slightly disturbing.

It’s a bit clunky for the transition from Sony to iPhone at 4:09 , but it looks and sounds great after that!

Kenny Mellman and Kathleen Hanna talking about Mecca Normal between songs in Portland at the Wonder Ballroom, October 9, 2016. Thanks to Pat Maley for capturing this! After Kenny says Mecca Normal is his favorite band, Kathleen tells the audience to but my paintings! She also does a brief imitation of me working at Home Depot! I was standing at the back of the venue feeling like this was part of a dream!

Mecca Normal (Jean Smith and David Lester) opening for The Julie Ruin at the Showbox in Seattle , October, 2016. Video by Connie Ostrowski 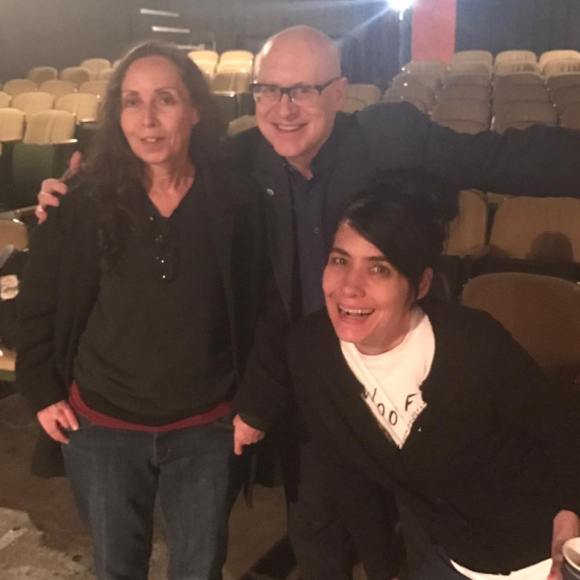 Mecca Normal and Kathleen Hanna at soundcheck in Vancouver 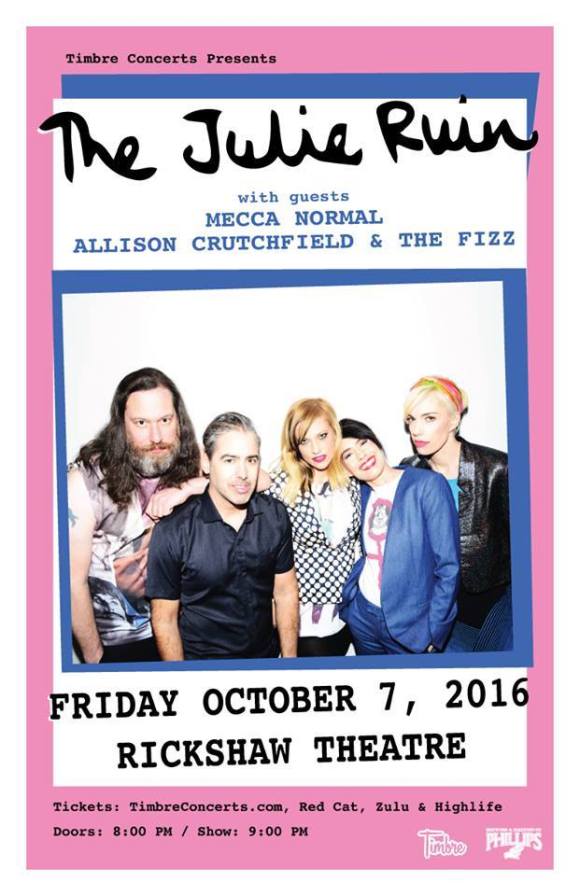 David Lester of Mecca Normal pre-show in Seattle at the Showbox. Photo by Jean Smith 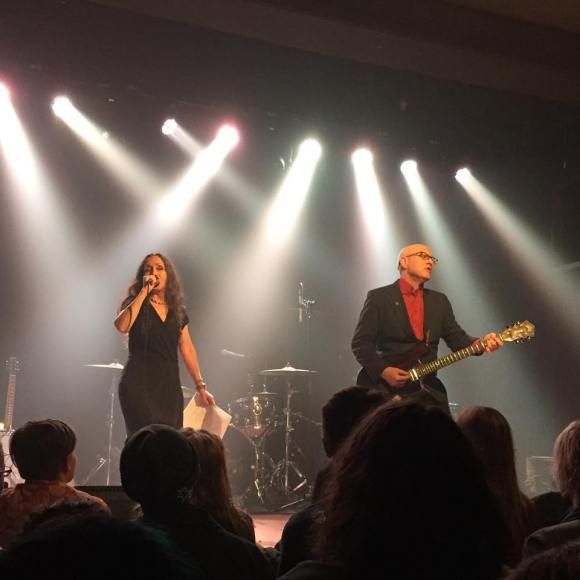 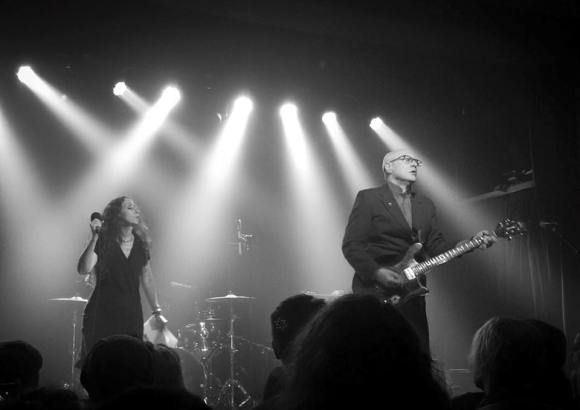 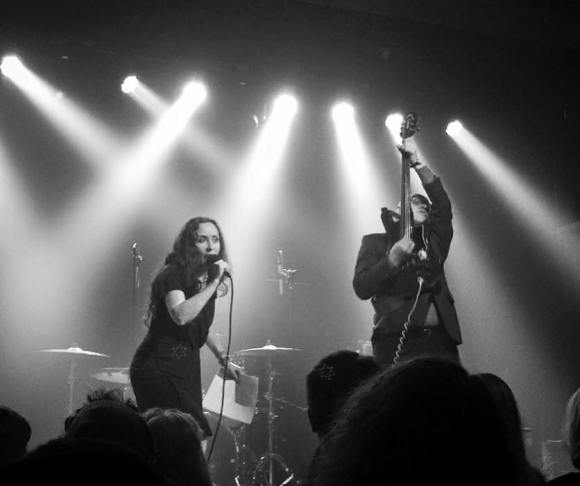 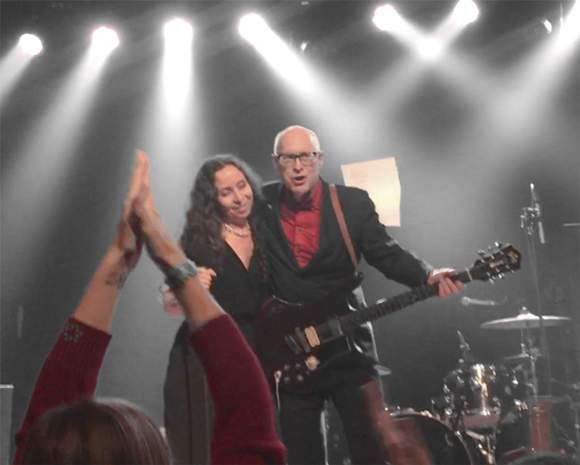 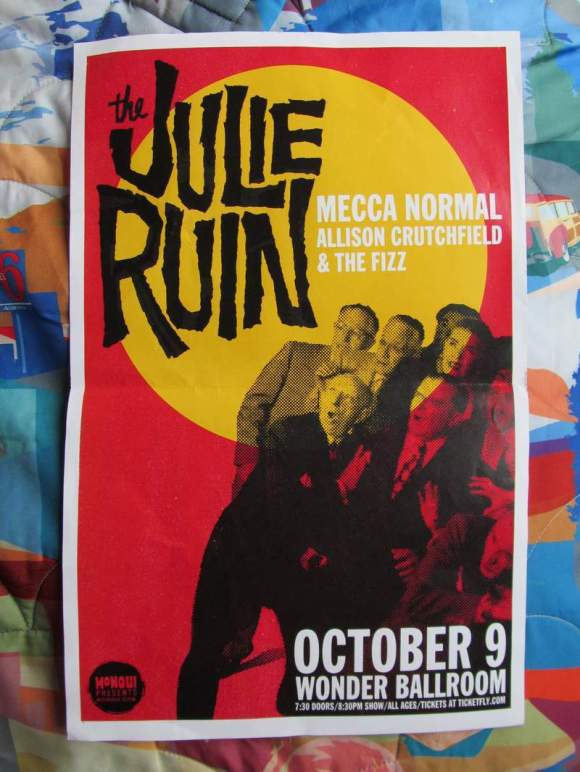 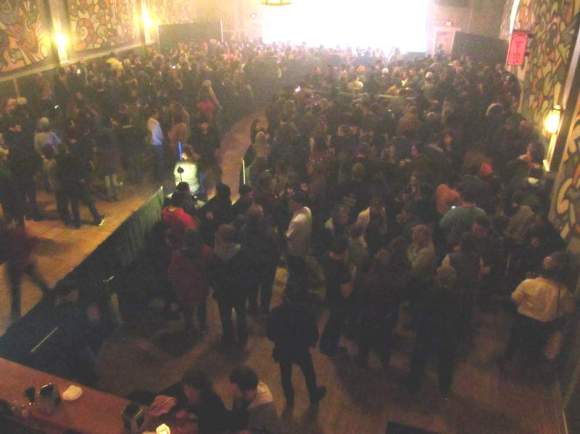 The crowd (approx. 700 – 800?) from the balcony in Portland, waiting for The Julie Ruin to take the stage at the Wonder Ballroom. 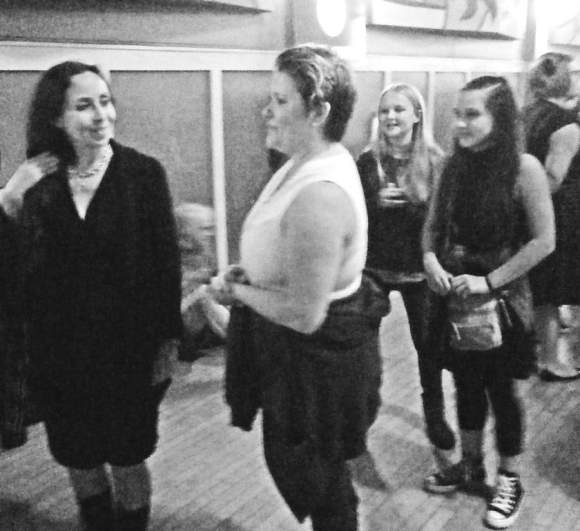 I was spontaneously gifted with a necklace by the mother of one of the two girls on the right after I signed their copy of Mecca Normal’s 7″ 1990-something EP Paris in April (K Records). Later, when I thought about the lyrics, I was happy they ended up with that one. The song is about a young woman who doesn’t want to be conventional; she wants to see travel, to see Europe in springtime.

Photos with fans!! Always a thrill! It was fun to get Pat Maley to sign the back of Calico Kills the Cat (K Records, 1989) since he recorded it! I think it’s the one we recorded in a (renovated) chicken coop in Olympia.

A Condensed History of Mecca Normal

Jean Smith in front of a blank canvas in the corner of the main room at the Artist Residency. Jean Smith’s current paintings

Christian Nerf with his art.

Judith Page and Simon at the Mikesells’ house.

Philip Topolovac at the Open House at the studios.

Jean Smith performing “Odele’s Bath” at the Open House in front of “No Coal” #1 and #2. 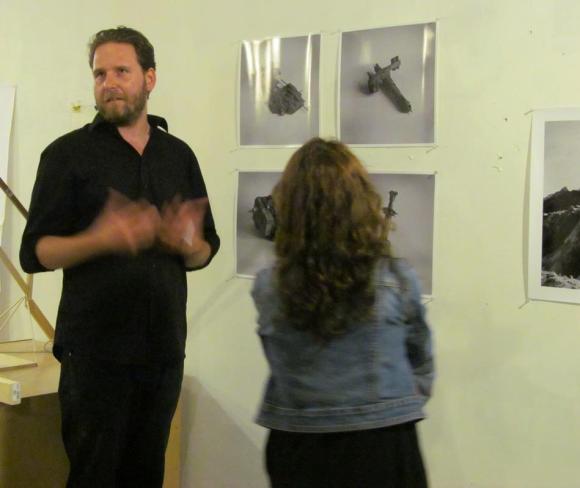 Philip Topolovac at the Open House. 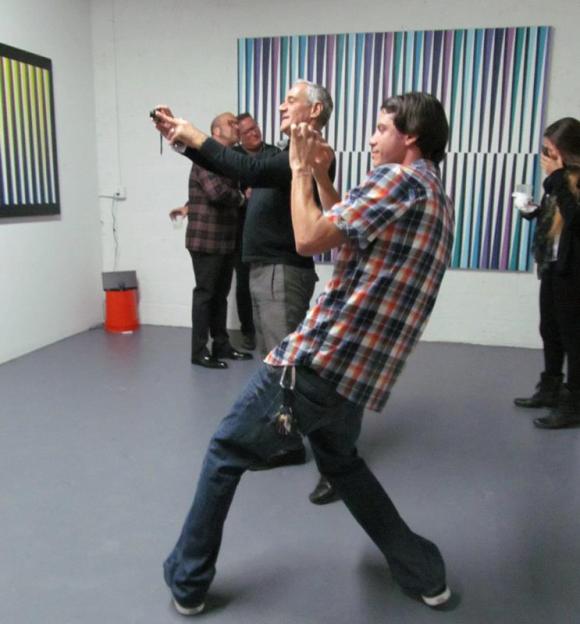 Carlos, the Surfboard King of Miami, taking photos in the liveliest of studios. Love his wave-riding stance!

Christian Nerf talking to a group of art lovers and collectors assembled at the Artist Residency.

Hew Locke and Christian Nerf at sunrise in Miami.

Phil Top through the flower.

Christian and Phil in the backyard.

View of the main room from my corner of it.

Hew and Phil at the Mikesells’ house.

All Mecca Normal’s albums (except the most recent one) are somewhat-secretly archived, chronologically, song-by-song in Normal History – the weekly column David Lester and Jean Smith collaborate on for Magnet Magazine.